Bever Park sits on a fairly quiet street on the SE side of Cedar Rapids, Iowa. It’s a popular park for local residents of the southeastern quadrant of Cedar Rapids, but some people will travel across town to visit the “Big Rock”.

There has always been speculation about where the “Big Rock,” came from; a meteor that fell from the sky was one theory, but most people agree it was just left over from the Ice Age. The rock protrudes from the Earth and as kids, we would climb on top and dare each other to jump to the other side of the creek.

I grew up in Cedar Rapids, a few blocks away from the park. A menagerie of animals-lions bears, monkeys, birds, and farm animals-called Bever Park their home for several decades.

I was a little girl, maybe 4 or 5, when I remember laying  in bed on hot summer nights, listening as an echoing roar filtered in through the open windows, courtesy of the resident lion, Leo, who reigned over the park during the ’60s and early ’70s. The peacocks joined in and I would fall asleep to their lullaby.

As the years passed, the animals found other homes, leaving just the small farm with a few animals as it appears today. You can still walk through and see a cow or two, donkey, goats, and ducks.

A concession stand sits at the top of the hill by the playground, where my sister made extra money when she was 15. Snacks, such as ice cream, soda, hot dogs, popcorn, and candy were sold. Once in a while you could get cotton candy, but the machine was so unreliable, they finally quit selling it all together. The park’s attendance dwindled int he ’80s and soon they only had the stand open occasionally, then eventually, not at all.

The cement wading pool is still there by the main playground,where I would spend hours running in and out with my friends, alternating the playground, the pool, then the playground again. The water was cold as ice if you jumped in too soon, but once the afternoon sun warmed it, it was free fun that entertained us for hours. It sits empty, summer after summer, with doubts that it will ever be filled again. Maybe they’ll build a splash pad in its place.

The playground had an old fire truck, wings, and a fire pole, one of my favorites. You had to climb up and then you could slide down the pole or a slide. A little neighbor boy missed the pole one time and fell to the ground breaking his arm. My dad had to carry him home and explain to his mom what happened.

There are three entrances to the park; two on Bever Avenue, and one from the other side from Grand Avenue. The entrance on the other side of Bever goes past the big swimming pool and up the hill where there used to be a small playground, but they took that one out years ago. 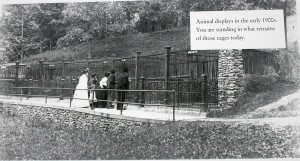 Bever Park in Cedar Rapids once was the home to lions, bear, and monkeys. (Courtesy of CR Rec. Dept.)

The Grand Avenue entrance takes you the back way through the park, up the hill past the tennis courts, past the farm, to the “Aquatic Park” they built a few years ago. I haven’t been this new version of swimming pool, and I think they just added water slides, but now that my grandkids are older, I’m sure I will.

My junior high summer days were spent at the pool, when it was only 50 cents for admission. Once again, fairly cheap entertainment for a generation who had no idea what video games and computers were.

I took my grandkids to Bever last week and told them stories of when Grandma was a little girl. Lennox (who is 3) didn’t really care but Lily wanted to know more. I told her about the animals, the playground, the picnics, and all the fun I had with my friends.

For a minute I was taken back to my earlier days; running around the cement pool, climbing on the fire truck, and listening to the occasional roar of the lion. I know Lily can’t possibly know what it was really like, but maybe someday she will make her own memories at Bever Park. And then she can share them with her own grandchildren.