It’s funny how we go through our lives, minding our own business, trying not to cause too many waves, when God smacks you right across the face. Sometimes really hard. 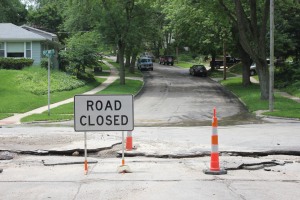 Rain Sunday night took out part of the road near our house. (Photo by Cynthia Petersen)

But He gets our attention. And if we’re smart, we sit up and take notice.

This is what happened to me.

I really wanted to see my relatives; aunts, uncles, cousins, etc.; some whom I haven’t seen in decades. So I reserved a pavilion (in February)  in the local park and sent out announcements of my intentions of having a get-together in June. Aside from a little squabbling over what we were going to eat and other minor details, it went off without a hitch. It was a little stressful, so when Jeff asked me to go on a road trip with him, I gladly said yes.

Most people don’t like the idea of driving 2,700 miles across the plains and mountains, but it was actually a very relaxing time for me. When I got home last Thursday, there was a house to clean for our guests, food to be bought and cooked, and T-shirts to pick up, but I was ready to go.

The reunion went great; 95 of my “Meis” clan showed up and we talked about our family history (Henricus Meis was born in 1709 in Siddinghausen, Germany) and we got to visit and have a grand ol’ time.

After the reunion, I thought the stress would dissipate and I could finally breathe easy.

But Sunday evening, the sky opened up and dumped 5 inches of rain on the Cedar Rapids area. Our street turned in a river, and in the morning, half the street was gone.

But that wasn’t the worst of it. Monday afternoon, winds in excess of 80 mph blew through our city, uprooting trees, cutting power to 50,000, and wreaking havoc. I heard the winds come up and helped my 83-year-old mother to the hallway where she stood until it blew over. (She can’t get down the stairs anymore).

We heard a noise and I ventured out to the living room, but it was only a few seconds before I retreated back to the hallway. The wind whistling through the front oak door was threatening to tear it off its hinges.

After the wind subsided, I looked out our bay window to see a large limb had come dangerously close to the house. We had been spared. I said a prayer of thanks for keeping us safe and helped my mom back to the living room. 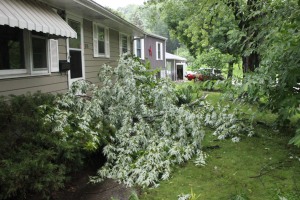 A limb came dangerously close to our house during a storm Monday afternoon. (Photo by Cynthia Petersen)

We were fine, but the power was out and we had no idea when it would come back on. So i made a trip to McDonald’s for dinner and my mom and I kept each other company talking and listening tot he radio.

The power was still out at 9 pm when we finally called it a day. And it was still out when I stole away to Panera’s for coffee and to use the internet the next day. No electricity meant no TV, no hair dryer, no curling iron, cell phone charger, computer, internet; I could go on but you get the idea. I felt helpless. I wanted to kick myself for thinking that way. I had become so depended on electronics that I was having a difficult time functioning because of the lack of electricity.

But my survival instincts too over and I salvaged what I could from the refrigerator. However, the sump pump was the biggest worry. No electricity meant no sump pump. My brother saved the day when he rented a generator for us and set it up.

After an entire 24 hours without power, it looked like we would have to endure another night, but the power miraculously came back on last night around 11:15. Everything that had been on when the power went out came to life, with the power of a hundred angels. (An exaggeration, sure, but after two days of “roughing” it, it felt THAT good!)

There was also a tragic reminder of how dangerous storms are. A good friend of mine lost his 17-year-old son Monday when he was sucked into a drain sewer.  A friend of his jumped in after him and was swept a mile down the sewer pipe and spit out into Cedar Lake. He walked to St. Luke’s Hospital a few blocks away, but Logan didn’t make it. They recovered his body yesterday afternoon in the same lake.

Crazy….senseless….chaotic. Mother Nature at her worst. We can’t fight it. We can only sit up at take notice. And, of course, learn from it.