I had some great Christmases through the years. Though some of them didn’t always turn out the way I would have liked, they were all great. But then again, when you’re a kid, they’re all great just because it’s Christmas. 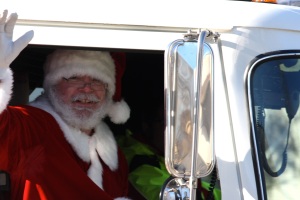 Santa Claus arrived in a fire truck Dec. 6 in Hiawatha-a little early, but no one seemed to care. (Photo by Cynthia Petersen)

My first memory of Santa Claus was when I was 4 or 5. My big brother told me all about how Santa Claus would come down our chimney when we were asleep and bring us all kinds of presents…if we were good. I spent that whole month before Christmas so worried that I wasn’t being good enough. But my fears subsided when I awoke Christmas morning with lots of presents to open from Santa.

We would always be reminded later that morning that the real meaning of Christmas did not lie in how many presents we received, but in why we celebrate the day at all; the birth of Christ. The story of the nativity kept me in awe, as we sang hymns and watched the story being played out by members of our church. As a 5-year-old, I had a hard time trying to figure out how the two symbols fit together. It wasn’t until many years later that I realized that the two symbols represent love in its highest form; unselfish acts of giving.

As I grew and reality stole my belief in Santa Claus, I tried to keep the feeling of wonderment I felt as a child. The excitement of Santa Claus may be gone, but it has been replaced by a more sincere and realistic view of why we celebrate Christmas. The feeling I get when someone I love opens a gift I know they appreciate, is the only gift I could ever ask for.

Some of the highlights of my Christmases Past include hearing jingle bells and looking out the window just in time to see Santa Claus (really our neighbor Mr. Ward) walking up a snow-packed street, shouting, “Merry Christmas!”

Another wonderful memory include my dad reading, The Night Before Christmas,” to us as we gathered around him in the living room on Christmas Eve, hanging our socks up on the mantel for Santa Claus to fill.

I remember sneaking up to my mom and dad’s closet with my brother and finding the gifts they had bought us, not wanting to believe that they were Santa all along.

Some of my favorite things at Christmas are:

I love Christmas. Not for the presents, or the parties, or the awesome sales, but because people are just nicer this time of year. People decorate their homes and pay their respects to the real reason for the season, Jesus Christ.

Because that’s what it’s really all about, Christ, and all that he represents.